Where are Inflation & Interest Rates Headed? 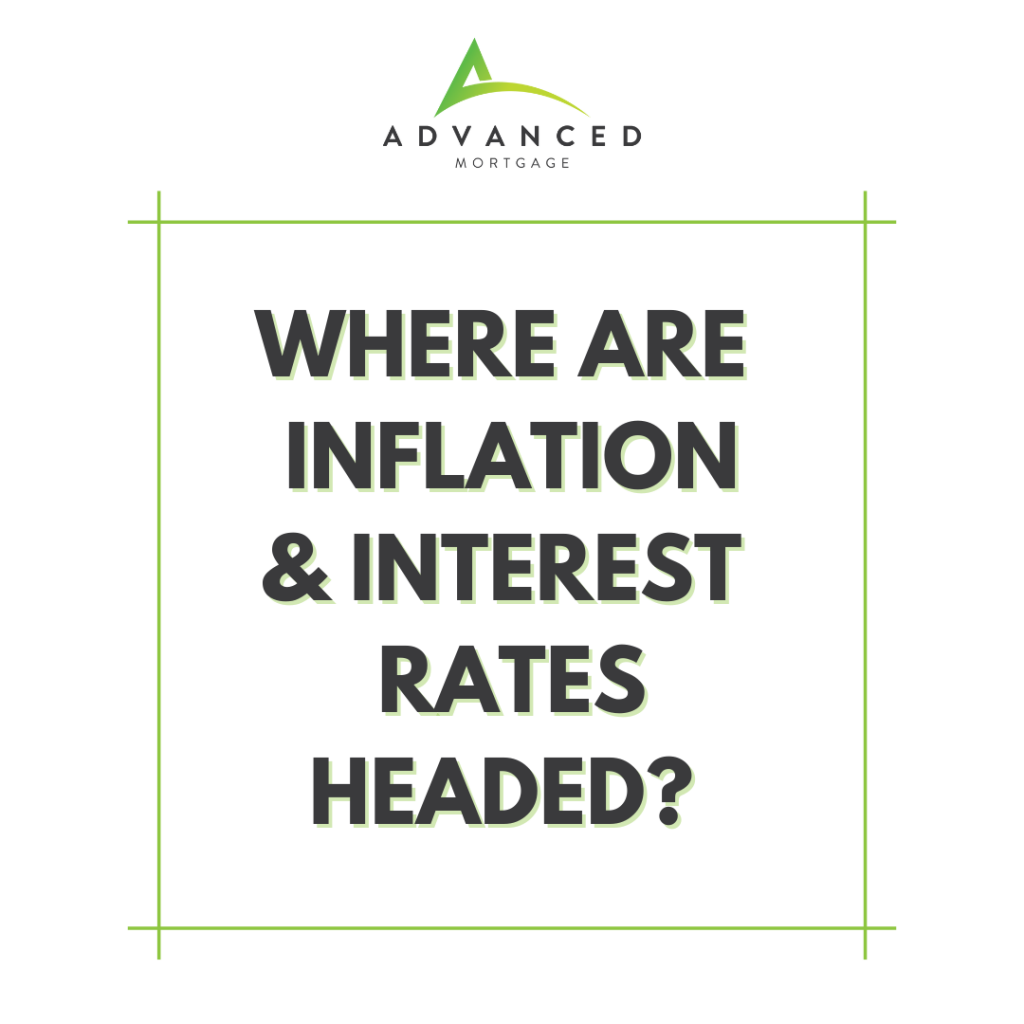 Where are Inflation & Interest Rates headed?

Anyone who isn’t living under a rock has heard about the rising interest rates lately. It’s a hot topic & most are anxiously wondering what the Bank of Canada might do next. Just last week they raised the overnight lending rate by another whopping 0.75%. We’re hoping they will now steady the ship and stay the course for the rest of the year.

*What ‘rates’ exactly are going up?

There are tons of different interest rates but the one we are talking about is the Bank of Canada’s (BoC) policy interest rate, also known as the target overnight or benchmark interest rate. This much talked about “interest rate” plays a key role in influencing many other interest rates. This rate represents the cost for banks to borrow money from bank to bank. This cost, in turn, leads to another key interest rate known as the bank’s prime rate.

The bank will use the prime rate to determine many interest rates for their lending, specifically this will affect variable-rate mortgages.The fixed mortgage rates are going up, too, however these are not connected directly to the BoC policy rate. They are influenced by the inflation rate.

*Why does the Bank of Canada raise rates?

The simple answer as to why the BoC raises its rates in the first place is to keep inflation low. The goal is to keep it at a rate of around 1% to 3% per year, as measured by the Consumer Price Index. The BoC is concerned with keeping inflation at bay and maintain a healthy economy. To do this, the most effective way is using their ability to set interest rates.

The BoC essentially controls the flow of money into the economy by controlling the amount of money that enters circulation. By increasing the interest rates, they can reduce the overall demand for money. People tend to spend less and save more when interest rates are high, which in turn reduces spending and helps to slow the rise of inflation.

The causes of inflation are complex, and many are international factors beyond the influence of the Bank of Canada. However, there are same domestic causes as well, Factors such as government benefits during the COVID-19 pandemic, rapid growth in house prices, and supply chain issues leading to low supply and increased commodity prices have worked together to grow inflation. Some may also point to corporate price gouging as a cause of inflation. While there has likely been some of this, it is not the only cause of inflation, nor the largest.

However, if the economy shifts too fast, spending may be so limited that businesses are forced to lay off their workers to cut costs. This period of mass layoffs and economic contraction is better known as a recession, and there is a real risk of such a scenario happening in Canada in the near future. 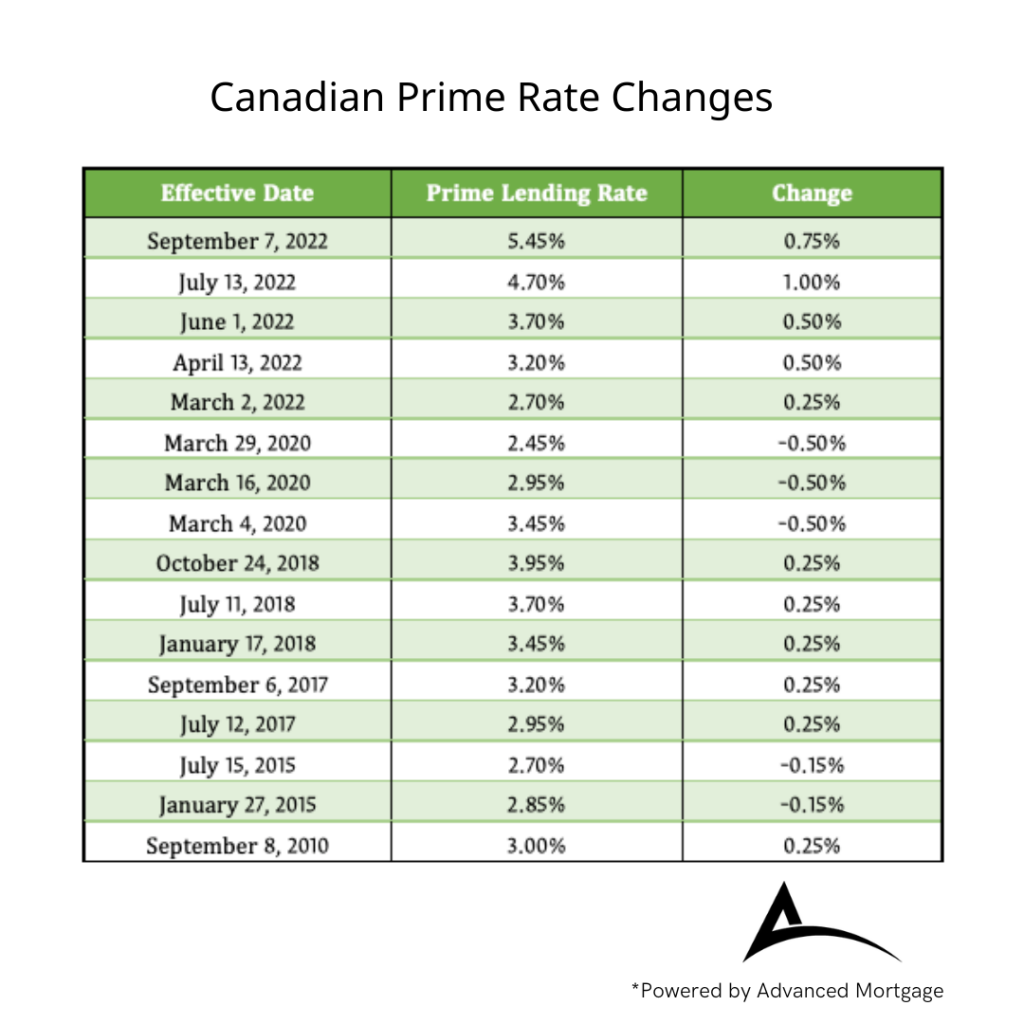 Luckily for us, we are in good company when It comes to inflation. Though we can’t control international factors, central banks worldwide are also working to slow inflation in their respective countries, which should help the overall global economy.

*How far will these rate increases go?

Currently there has been estimates predicting rates to continue increasing at least until the end of the year. The BoC’s aim is to lower the inflation rate, so they will surely continue to raise rates until inflation is under control.

Current predictions put the BoC policy rate somewhere between 3% – 4% by the end of the year (currently we are at 3.25%). This would be in line with the interest rates seen in the 2000s, though notably higher than rates in the 2010s. Rates have been decreasing since the 1980s when the interest rate in Canada peaked above 20%. In fact, our current rates are more the norm than the exception.

*What does a rate increase mean to me?

The most obvious effect is rising mortgage rates. Especially for those who bought their homes in the last couple of years and opted for the very low variable-rate mortgages. Also considering factors such as an elevated market with higher purchase prices, this has resulted in paying higher interest on an even higher value loan.

Even though the BoC’s interest rate doesn’t directly affect fixed mortgage rates, it will put pressure on the bond yields that help determine these rates. As a result, there may be an increase in these rates as well when it’s time to renew.

As mortgage rates increase, home values may decrease as the affordability will be affected. Rate hikes may also affect home equity loans and some credit cards, among others. In general, this will discourage a lot of borrowing in the near future as debts become harder to service.

Businesses also will also be affected by an increased cost of borrowing. Not only will their costs go up, but the number of customers they have may decrease, This will encourage businesses to keep prices low. In the longterm, this works to reduce the inflation rate, which will hopefully be seen as a positive even if it comes after a few years of pain. 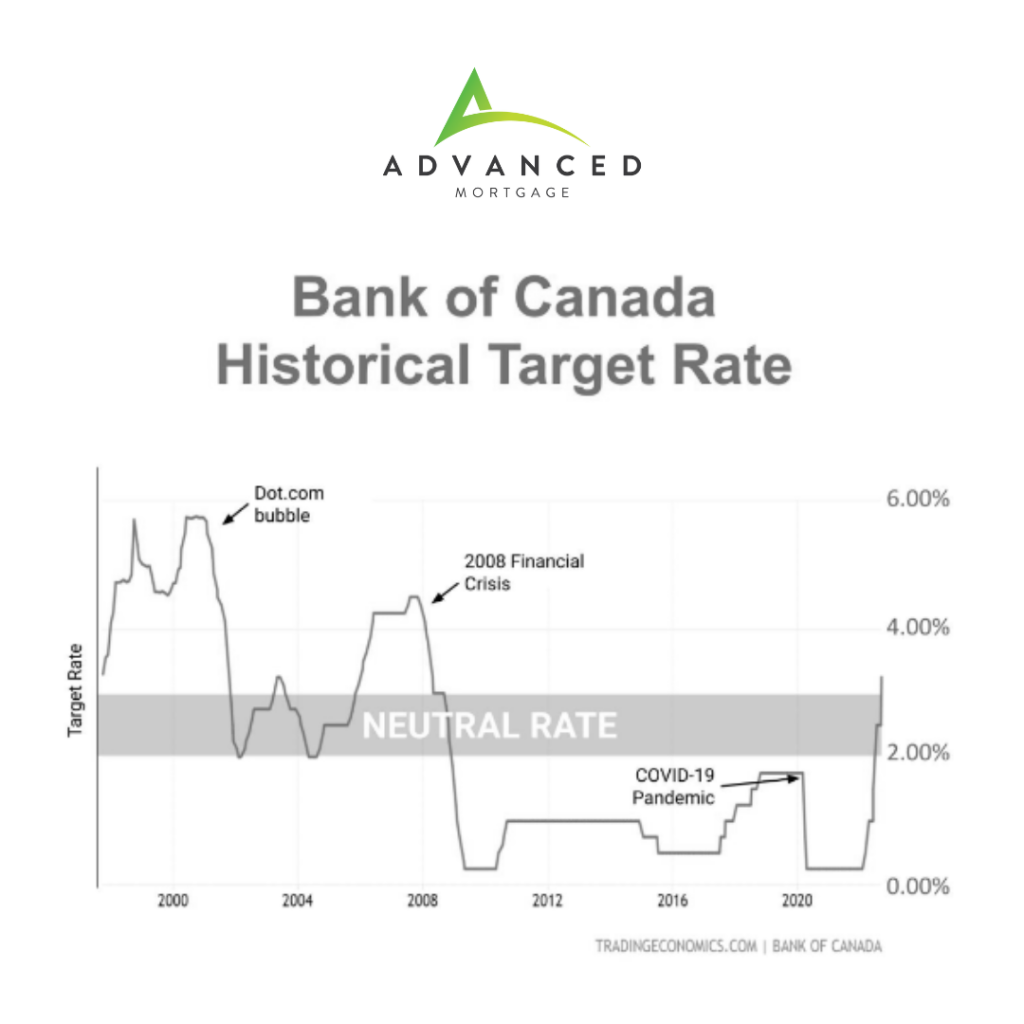 Ultimately, the bank of Canada is in a tough spot in the fight against inflation, What follows will likely be a period of increased costs for Canadian homeowners, reduced spending power, potential job losses and more.

As we all know, the economy works in a cycle, and despite the hardships these rising interest rates cause, it will benefit the Canadian economy in the long run. In the meantime, the best thing Canadians can do is educate & protect themselves, evaluate their financial situations and budget their spending so they can establish a foundation that doesn’t shake under the pressure. An Advanced Mortgage Professional can help with all of this! Give one of us a call today!

Advanced Mortgage is dedicated to be Western Canada’s #1 choice for residential lending solutions. We bring a fresh and unique approach to the residential lending industry. Our team is driven to provide the best customer service and is continually on the hunt for new products and solutions we can offer our clients.